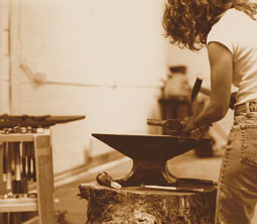 In The News
Get In Touch

Paula Newman Pollachek, born and raised in Akron, Ohio, received her BFA from the University of Wisconsin / Madison and her MFA from California College of the Arts in Oakland / San Francisco. She runs Newman Metalworks, LLC, a metalsmithing and design studio working primarily in precious metals.

Paula’s work is a part of the permanent collections of the Jüdisches Museum Berlin, Germany and The Magnes Collection of Jewish Art and Life, Berkeley, California. She is part of private collections in North America, Europe and the Middle East.

Recent publications include The JMB (Jewish Museum Berlin) Journal Nr. 7, 2012, on the children’s audio guide based on Paula’s 5 spice boxes there; Art Jewelry Magazine, Beyond Jewelry, 2011; Highlights of the Jewish Museum Berlin 2010; The Jewish Museum Berlin’s guide to the Permanent collection, 2009; 500 Metal Vessels, Lark Books, 2007; Blessed Is the Daughter, Schreiber Publications, Inc.,1999; The Chicago Tribune and San Francisco Examiner Magazines. The artist was a prize winner in the Spertus Judaica Exhibition 1998 and a finalist for the American Craft Museum Horizon Award 2001, New York City.